VHF Sport » Advice » What is the right length hockey stick for youngsters?

What is the right length hockey stick for youngsters? 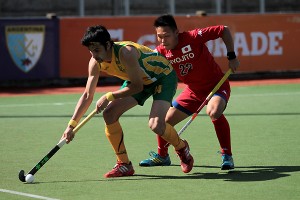 First up we have SA hockey Lad ‘Be a Hero’ ambassador Jonty Robinson:

I enjoy the bit of extra reach when defending and I also feel that I can carry the ball a little further from my feet, assisting with vision while I’m carrying the ball.

I’m not the tallest guy, so when I’m asked about the size of my stick, I often get strange looks for playing with a longer stick, especially when I’m in Europe. They all play with 36.5 even though loads of them are pretty tall.

Justin is one of the tallest players in the SA team, proving that height does not neccesarily dictate the length you should play with. Follow Justin on his adventures around Holland and in India on @justinreidross

Next up we have the young and talented SA Lad Goalie Michael Smith:

In my mind the Osaka goalie is the best stick ever made for a goalkeeper. It has the perfect balance and is almost as if it was made for me.

I pick basket upon basket of cherries 5 times a week with that beauty.”

Surprisingly enough, Smithy has so much time in goals that he always has time for a quality chirp before he saves it, especially when team mate Ricky West is at the top. Best club battle in JHB. Follow Smithy’s progress @MSBilly13.

That brings us to another SA Lad and Suunto Brand Manager Ricky West.

I chose to play with 36.5in for more control. Is it easier to pick your teeth with a toothpick or a chopstick? The Low Bow allows me to get the ball off the turf much easier fooling people into thinking I have better elimination skills than I actually have! 570g is the perfect weight. If you go too light you lose control of the head, too heavy 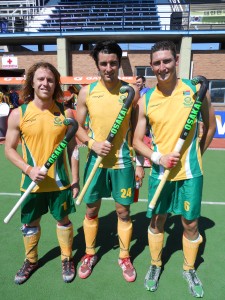 and you can’t maneuver the stick fast enough in pressure situations.”

To find out more about Westi and his ongoing battles with Smithy follow him @RickyWesti.

Our next Osaka Champ is a man who can probably quote any line from any movie ever watched. I will also have money on him being able to answer any one liner joke thrown his way. If you don’t believe me give him a shout on twitter @Dyl_Coombes15.

“36.5in Osaka Pro Tour Mid Bow. This is a wand, not just a stick. It’s magic. I  have  selected  the  36.5in  as  I  feel  I have better control and can get passes and shots off quicker. The Pro Tour offers me both power as well as feel with an incredibly soft touch. It is simply awesome.

The following youngster originated in Johannesburg and has decided grace Cape Town with his talent. When asked how many push ups to do he responds with ‘I’ll do all of them!’ We were very lucky to get a few words from Daniel Bell about his stick choice.

The first time I placed my hands on my Osaka black mamba I knew we were destined for greatness. Ever since that moment we’ve been destroying forwards confidence after each deadly tackle. Goal keepers’ pulses begin to rise when they see me coming in at top-D for a drag-flick because they know my Osaka black mamba only produces venomous flicks which reach the back net.”

Finally we end off with the ‘I’m talented at any sport I decide to play’ Sean Landsdale. When his bored of hockey he will decide to stand on the post and display his array of elegant cricket strokes sending the ball far from its intended target. Drag flickers beware!!

“37.5in length, super light 564g, Pro Tour Low Bow!!! Reason for choice of Osaka weapon?? Purely because it’s the best stick EVER!!! Even if there was a FIRE!!! Jokes aside I love that my stick offers me the feel, power and control all in one!! With the low bow allowing me to make slight pops in order to get around or through my opponents. Hands down the best stick I’ve played with. Osaka, living the dream, feel the vibe!!!”

I hope this helps you with your decision on what stick length to choose. I know some of you are thinking, “But it’s only an inch difference between the 36,5 and the 37,5.” It’s more than just an inch. As a striker 1 inch to long and you don’t quite get that quick shot off, 1 inch shorter and you are able to keep the ball closer to you. Make sure you decide to pick the stick that you feel most comfortable with. If you love your Osaka, your Osaka will love you.